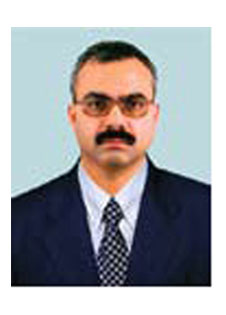 Shri Sanjay Burman, OS/ Sc'H', took over the charge of Director, Centre for Artificial Intelligence and Robotics (CAIR), Bengaluru, wef 1 November 2012. He did his BSc (Electronics and Telecommunication Engg) from Sambalpur University, Orissa, in 1985, and MTech in Signal Processing from IIT-K, Kanpur, in 1995. He is currently pursuing PhD in the area of reconfigurable computing at IIT-Madras, Chennai.

Shri Burman joined Electronics and Radar Development Establishment (LRDE), a premier DRDO laboratory at Bengaluru, in 1986. In November 2000 he was transferred to CAIR, Bangalore. His current areas of interest are in the fields of communication, networking, security, and allied subjects. Prior to his appointment as Director, he was heading the Communication Systems and Security Division of CAIR, where his Group designed a number of innovative communication systems and high grade security solutions for various communication links.

He has contributed to the design of several security solutions, which have been productionised and deployed in the field. He has won a number of Republic Day Awards. He was awarded Sir CV Raman Young Scientist Award in 1999; Laboratory Scientist of the Year award in 2005; DRDO's Agni Award and Performance Excellence Award in 2005, 2006, and 2007 for the development of secure communication systems that have been productionised, and DRDO Scientist of the Year Award in 2010 from the Prime Minister of India.

Shri Burman is a founder member of the Cryptology Research Society of India. He has a number of publications to his credit in the areas of cryptography, security and re-configurable computing in national and international journals. He has delivered a number of invited talks and tutorials in the area of cryptography and security systems. He is in constant touch with the academia in his field and has encouraged inclusion of security related courses in academic institutions.