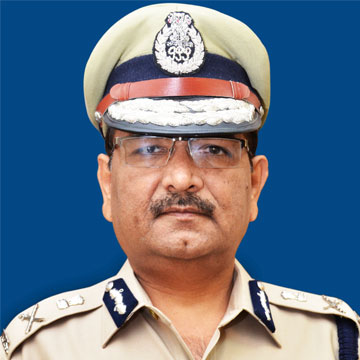 Dr. Muktesh Chander graduated in Electronics and Telecommunication Engineering from Delhi University in first class with distinction. After doing one year specialization in Statistical and Quality Control and Operations Research from ISI, Madras, he joined Bharat Heavy Engineering Limited as a Quality Control Engineer and received several awards for improvement in the quality and productivity.

In 1988 he joined Indian Police Service and has remained posted to several places including DIG Goa and Addl. Commissioner of Police, Crime, and Traffic Delhi and IG Daman Diu. He has served as Centre Director Cyber Division and National Critical Information Infrastructure Protection Centre in National Technical Research Organization under Prime Ministers’ Office. He was specially selected as United Nation Police Observer and has monitored, trained and advised police in Bosnia and Herzegovina in Europe for 1 year. He has also done Hostage Negotiation course at Louisiana State Police Academy, USA and Law Enforcement Executive Development Course with FBI, Los Angeles, USA.

He has written a number of articles on Cyber Crime and related topics, which have been published in various prestigious journals and newspapers. He is a resource person for premier institutes like Rajasthan Police Academy, Gujarat Police Academy, Gujarat Forensic Science University, National Crime Records Bureau, Punjab Academy of Administration, Bureau of Police Research and Development, National Institute of Criminology and Forensic Science, CBI, IILM Institute of Higher Education, Indian Law Institute etc., His paper on Cyber Terrorism was selected for the 35th All India Police Science Congress in 2004. He was member secretary of the Joint Working Group which formulated “Guidelines for Protection of National Critical Information Infrastructure in India”. He has also served as Centre Director of Cyber Division of National Technical Research Centre under Prime Minister’s office.

He is life member of Computer Society of India and an elected Fellow of Institute of Electronics and Telecommunications Engineers (IETE) as well as The Institution of Engineers India. He has been awarded by IETE with Hari Ram Toshniwal Award 2013. He is also life member of India Society of Criminology and Indian Society of Victimology.

During his spare time he plays on flute and mouth organ and listens to classical and semi classical music. He regularly performs in various programs of Delhi Doordarshan and other musical events. His CD of flute songs was recently released by Sh. Yesso Shripad Naik, Minister of State, Govt. of India.

He is currently heading Goa Police as Director General.