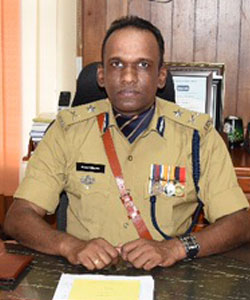 Manoj Abraham is currently working as Inspector General of Police, Thiruvananthapuram with an additional charge of Cyber Security, in Kerala State, India. He started his career as ASP Adoor and Kasaragod and later on promotion went on to become Supdt of Police in Pathanamthitta and Kollam Districts. Following a series of Murders in the politically volatile district of Kannur, he was then posted to Kannur for a tenure, which lasted four years. With the professional and no-nonsense approach, the officer was able to quell the violence and usher in a new area of peace and tranquility, inviting accolades from all quarters. This was followed by a Seven-year stint as Commissioner of Police of Cochin and Thiruvananthapuram Cities. During this period a lot of work was done in the area of Community policing- Maitri and Janamaitri- by organizing the citizens in all aspects of crime prevention and detection, which resulted in a huge dip in the crime rate in the city, drawing accolades from all quarters. Kochi City Police won the International Community Policing Award 2009 of the IACP ( International Association of Chiefs of Police, USA) for the success achieved in the community policing programmes. He was also decorated with the Man of the Decade Award 2011, for the Crime Control and Law and Order Management in Kochi City. He was also awarded the Presidents Police Medal for Meritorious Service in the Year 2011. He was also instrumental in organizing the Global Community Policing Conference 2010 and 2014 in Kerala- one of the largest international conferences of Police officers. He has also co-authored a book called- Global Community Policing- Problems and Prospects, published by Taylor and Francis Publications. In the area of cyber crimes, he is the Chief architect of the Cocon conference held annually on the theme of public-private partnership for enhancing cyber Security. He is also the Architect of Cyber Dome- a center for private-public participation in cyber policing, which has become a model center for Cyber Security in the PPP domain. The Centre has become one of the most potent agencies in the area of cybersecurity and prevention of cyber crimes. He has won many awards in the area of cyber crimes and cyber security which includes the 'Special Achievement Award' under the INFOSEC MAESTROS in 2014, Nullcon Black Shield Awards” under the “Gov-r-nator” category for year 2014, Asia-Pacific ISLA Senior Information Security Professional Award 2013, Finalist in the DSCI Excellence Awards 2015, Innovation and Excellence Awards 2016 of Security Watch, India, Digital India Knowledge Awards 2016 and host of other awards and recognition.