Senior Staff Correspondent at The Tribune 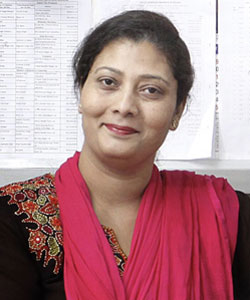 Rachna Khaira is The Tribune’s Senior Staff Correspondent and is covering regional politics, NRI Affairs, and Sports since 2013 at Jalandhar.

Married to a former army officer in the Indian army, the journalist was exposed to pan India reporting experience in states including New Delhi, Rajasthan, Karnataka and at her present posting place in Punjab.

She started her career with Asian News International (ANI) as a tv journalist at New Delhi and later went ahead to work with national English dailies including Times of India and the Indian Express at Chandigarh. The journalist also worked with vernacular dailies like Rajasthan Patrika in Bikaner and even produced a 1women empowerment show ‘Manasi’ for a local tv channel in Karnataka.

An investigative reporter by nature, the journalist had highlighted serious lacunas in the children adoption process adopted by the Central Adoption Resource Authority (CARA) in India where children reported as missing in various police stations of Punjab were found offered in adoption to foreign nationals.

She is a graduate in English (Honours) from Delhi University with a post graduate diploma in journalism and Mass Communication.

Her recent expose on the vulnerability of Aadhar database in her report ‘Rs 500, 10 minutes and you have access to billion Aadhar details’has shaken the entire nation falling which an FIR was registered on her by the UIDAI.