Member of Parliament, Govt of India 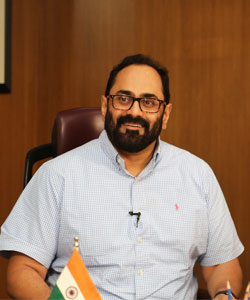 Rajeev Chandrasekhar is a Technology Entrepreneur and Member of Parliament serving his 2nd term in Rajya Sabha. He is a member of the NDA and is currently Vice Chairman of NDA in Kerala.

An engineer with a master’s degree in computer science from the Illinois Institute of Technology, Rajeev Chandrasekhar earned his spurs in the United States, where he worked for Intel and was a member of the team that designed the Intel chip.

Later, Rajeev returned to India and launched one of India's first mobile cellular company BPL in 2005.

Recognition of his entrepreneurial zeal, the Visveswaraya Technical University, Karnataka conferred him Honorary Doctorate in April 2013.

As one of India's most informed and experienced MPs in areas of technology, finance and economy, Mr. Chandrasekhar has been a strong votary of Digital India, Internet and Technology issues, including promoting innovation and entrepreneurship, and the government's role in Internet Freedom and Technology Policy reform.